I married this man a year and half ago. I am so thankful for the ways the Lord has blessed us, in our marriage, with jobs, with the perfect home, good friends, a wonderful church, and adventures. I really had no idea what marriage was going to be like, but it is the best, and Josh is truly my best friend.

Josh,
Before you, I didn’t know arguments could be productive. I thought disagreements meant there was a fundamental problem, and that the relationship was doomed but you have taught me that working through them can make a relationship stronger.
I was so excited to marry you, but I didn’t want someone hogging the covers… and you did. I think we have learned a lot from sharing the same blanket (aka we selfishly prefer an entire Queen Size blanket to ourselves and we  fought a lot in our sleep).
I didn’t know if I could feed us… I was convinced every dish I made would give you food poisoning. I didn’t know if I could work full-time, but I knew I had to because we were literally living on wedding money. I was so scared I would be a terrible-horrible-no good wife, and I thought so many times that you were disappointed in me and had married the wrong person.
Thankfully I have been wrong on most counts (not sure corndogs count as a “meal” but sometimes it happens)… and I love my role as your wife. Since it’s a half-anniversary, I will write half as much as I want. 😀 I love you!

Babe, we have a wedding site… we have the church booked… I have my dress, and I cannot wait to marry you.
And kiss you.

But seriously. Yesterday we made our wedding site.
Under the Honeymoon tab, you wrote “none of your business!” It cracked me up!! I am so blessed to spend my life with such a goofball. 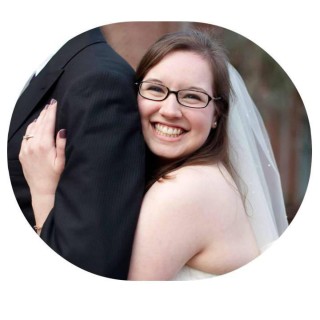